The Best Furniture in America You May Never Have Heard Of: D.R. Dimes

Oh, how I hate to end phrases with prepositions!! But a headline just isn’t nearly as catchy (or as Google searchable) had I written “The Best Furniture Company of Which You May Never Have Heard.” Oh well. My 10th grade English teacher laments.

Anwho! Today, I’m here to bring you that behind-the-scenes tour with one of America’s finest furniture makers. This blog post may seem a little magaziney-interviewish, but it’s the only way I can attempt to depict this true scion of New Hampshire. So bear with me as I switch editorial voices. I used to be in public relations and marketing, after all.

Here’s your first clue: the company made one of the pieces in this dining room. 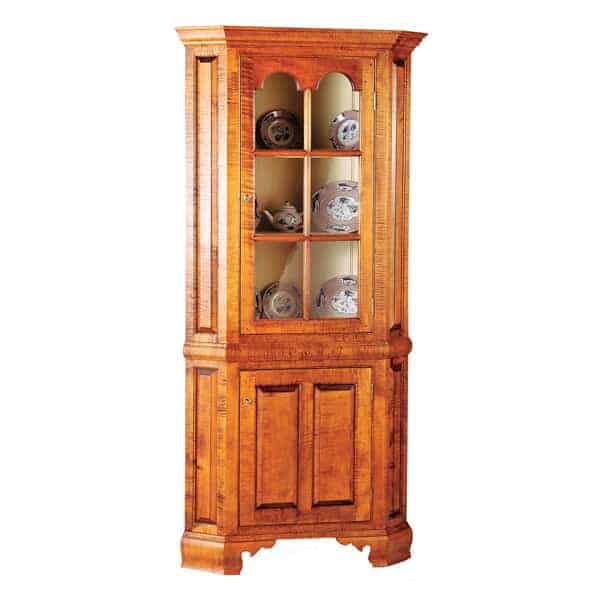 Something you might see in Colonial Williamsburg, right? Well actually, you may have! But we’ll get to that later. And don’t go away if you think — “Awww, this is gorgeous, but it just isn’t my style.” We’ll get to your style later on, too. And if you have further questions after that, you can check out this post about incorporating classic furniture into fresh, new design.

Back to our furniture maker — second clue: the late Senator Ted Kennedy, designer Tom Scheerer, and actors Mel Gibson and Nicole Kidman are all aficionados.

Last clue: it is famous most especially for its tiger maple furniture, a.k.a. flamed maple, curly maple, ripple maple, fiddleback or tiger stripe, and is Eldred Wheeler’s biggest competitor (but with far better quality control, IMO and the ability to innovate and make completely custom designs — even kitchens). 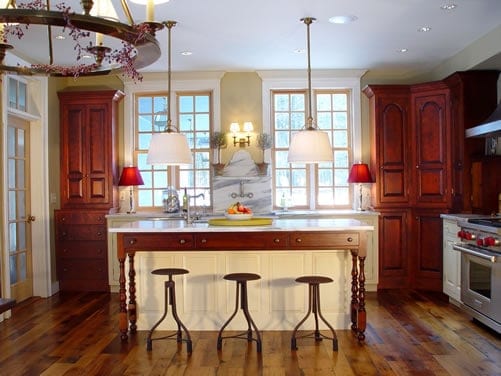 For more than forty years D.R. Dimes & Company has been crafting museum quality reproduction American furniture. Founded by Douglas Richard Dimes in New Hampshire in 1964, the company grew from a one man shop to an American institution. Along the way Dimes was commissioned by nearly every major Early American museum in the country.

As he tells it, the story of D.R. Dimes & Company is a quintessential American tale of grit, perseverance, and good old fashioned (and flinty) Yankee work ethic. In the early 1960s, Dimes Sr. walked into the Windsor chair shop belonging to his brother-in-law Leroy Partridge and expressed an interest in learning the trade. Do you think brother Leroy acquiesced with fraternal affection and a desire to collaborate?

“From that day, my uncle Leroy wouldn’t let my father in the shop.”

Partridge came from a long line of furniture makers, and he wasn’t about to divulge the family secret to an in-law. So, armed with The Windsor Handbook by Wallace Nutting (which, btw, includes only images of Windsor chairs but no indication of how to create them), Dimes Sr. set up shop in Epping. He made his first chair in 1964. Douglas Partridge, his son, was born in 1966.

“My mother knew I would follow in my predecessors’ steps, so she gave me the middle name Partridge. I was literally born to become a furniture maker,” says Doug.

That first shop was “a little dump,” Doug recalls, but his father worked all hours of the day and night there, honing his craft. Doug began sweeping the shop at age 10 and sanding chairs at age 15. The apple doesn’t fall far from the tree, it seems. “I don’t have a hobby. Most guys fish or hunt, or play golf or something. This is my hobby. I’m always here.”

We’re in his office, and Doug gestures to a frame on the wall with his father’s favorite quote:

“Nothing in this world can take the place of persistence. Talent will not: nothing is more common than unsuccessful men with talent. Genius will not; unrewarded genius is almost a proverb. Education will not: the world is full of educated derelicts. Persistence and determination alone are omnipotent.” (Calvin Coolidge)

Tom Lavigne, the first non-family employee, began working at age 15. Forty-nine years later, he is General Manager. To a stranger like myself, the two seem about as close as brothers. Doug describes the elder Dimes, from whom he bought the business 7 years ago, as “driven” and “a hard man.”

“He was a stick of dynamite, you mean,” quips Tom.

They both chuckle at that, but one can only imagine the scenes those two had witnessed in the workshop over the years.

“My father was a legend,” Doug explains. “His theory was, ‘We have to make it better than anybody.’ It’s always been the culture of our company. You’ll never get in trouble for doing an excellent job.” Cut corners, and you’ll be shown the door. I like that.

Though business was slow in through the ’60s and early ’70s, that culture of unstinting excellence paid off when America’s Bicentennial reignited an interest in colonial furniture and craftsmanship. Business began to boom.

Growing up, Doug had a different job every summer. “One summer, I was making seats and another I was turning legs.” After graduating the University of New Hampshire with a degree in business, he joined the company full-time doing marketing and delivering orders. Early on, Dimes Sr. named the company the “Windsor Chair Shop,” but as the company started producing case goods and the Dimes name became more well-known, Doug suggested changing it to its present eponymous version.

“The guys in the shop — they’re amazing craftsmen — and here I was, the boss’ kid…. Fortunately, I learned quickly. I told you, I was born to do this,” Doug says. “When I had to turn, I could just turn. When I had to carve, I could carve. I spent lots of nights in the shop working my skills.

“I look at furniture books all the time [for inspiration and information]. We don’t just make reproductions; we make our particular adaptions of the originals. I can always tell when someone has learned to design on CAD rather than by hand. I use CAD, too, but I do it by hand first. Somehow, something doesn’t translate when you begin on the computer screen. Proportions … something … it’s just off.”

Dimes furniture is in dozens of museums. I comment on some I’ve been to — Colonial Williamsburg, the Smithsonian, Independence Hall, the Wadsworth Atheneum.

“Yeah, I think we have six or seven on the website, but really, how many do you really need on there for someone to get the idea? I think the number is really about 60 or 70.”

Well, perhaps we won’t count modesty as one of Doug’s more distinguishing characteristics. 🙂 But who needs modesty in an artist, right?

While all the craftsmen in the shop continue to use hand tools, Doug has “revolutionized” much of the production over the last 15 years. (He showed me some measures they’ve taken, but if I told you — and therefore his competition — he’d kill me.) These lean manufacturing measures have gotten production for museum quality furniture from 12-14 weeks down to 3-4 on any piece.

One thing he won’t divulge, even to me under pain of death, is the company’s secret behind their “Olde Amber” Tiger Maple finish. I can’t take a picture of it to adequately show you, but it’s like the most luminous satin — three-dimensional and so soft. Not shiny, not lacquered or varnished. Doug softly strokes a bed headboard, “I love being a furniture maker.”

“You can get whatever you want,” he says, “with two limitations. One, that it’s in good taste –,” he pauses, “– and it’s mine that counts.” I ask him if I could quote him on that, and he smiles and says, of course. He has to feel that the design is up to standard, or he won’t put the Dimes label on it.

Yes … doesn’t that limit us all?

Doug has hundreds of designs on his computer that that have yet to be realized. He shows me some, which of course I can’t leak here — amazing mid-century designs with gorgeous dovetailing, transitional pieces that would knock the socks off Barbara Barry’s line for Baker or the like.

A couple of Dimes’ less reproduction-like pieces that actually have been fabricated: 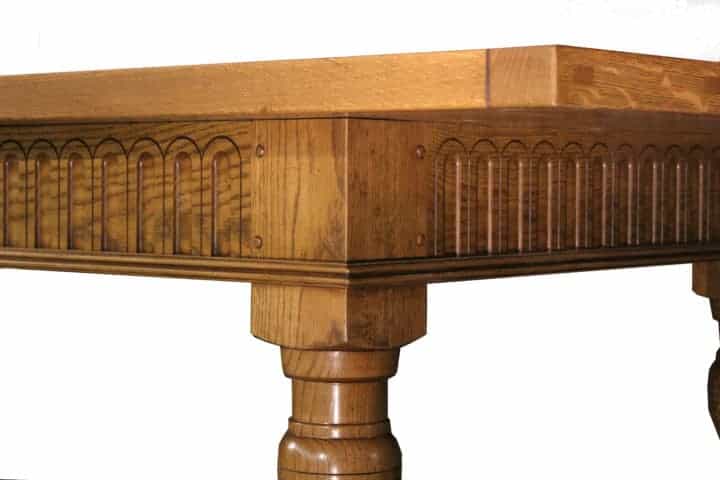 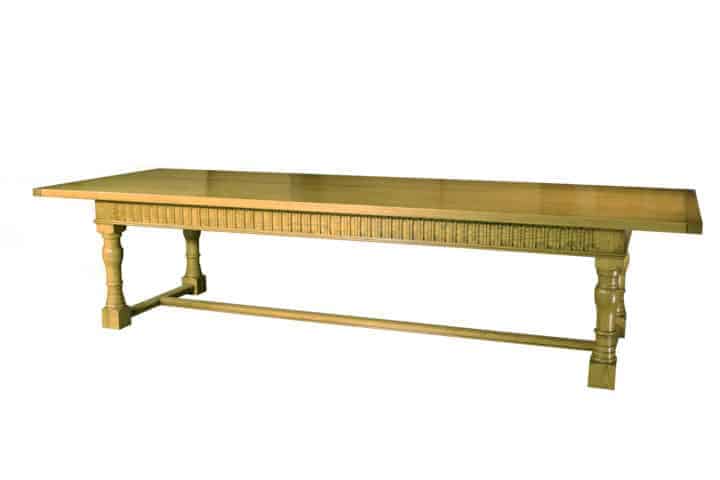 I ask Doug what is next for the company, and here he seems less sure. Following the heady days of the ’90s-mid 2000s, D. R. Dimes has had trouble recapturing the sales it had prior to the Great Recession. As I discussed in this post here, Generations X and Y seem less inclined to spend the money required to buy heirloom furniture as our parents did, and, for the majority, our style is far less formal. Nor do we often walk into fine furniture stores — we shop online. How will D. R. Dimes approach the generations following the Baby Boomers?

Perhaps it’s time to call up his most famous designer customer Tom Scheerer and propose a signature item or set of items at the next High Point Market — take a cue from Bunny Williams, Alexa Hampton, Jeffrey Bilhuber and so on. Heck, Tom apparently loves Dimes Windsor chairs so much he furnished an entire Long Island Country Club (not to be named) with them. And Windsor chairs can translate from traditional to modern decor in 1 second flat. Perhaps set up a booth and pitch a tour to the Design Hounds? Become a sponsor for one of the major showhouses like Kips Bay or the Hamptons?

In the meantime, should you be like me and feel like D.R. Dimes furniture is screaming to be in your home, there are a few ways to acquire it.

As for #3, that’s how we got that corner cabinet for the dining room — Craigslist, or as Doug may say, his nemesis. I understand, Doug, but someone has to buy the Baby Boomer cast offs! A word to the wise if you do find your Dimes’ piece on any of the listed #3 options — do your homework. Find out the original cost and cut it by half. That is what you’ll pay on consignment for a perfect piece. Craigslist or auction should go for less (a consignment store would give the seller 50% of the sale price), but it at least gives you a starting point for negotiations.

“The thrill is making it,” Doug tells me. “This is what I always wanted to do.” A man who knows his mind.

Do you have any D.R. Dimes furniture in your home? Or, what type of piece would you like to see Doug make?

2 thoughts on “The Best Furniture in America You May Never Have Heard Of: D.R. Dimes”

PrevPreviousORC Spring 2017: 10 Makeovers to Watch This Season
Next2 Common Tile Mistakes in the Bathroom … and How to Avoid ThemNext