I got the idea for today’s post while going on a color consult. The client wanted to have a gray room, and I have nothing against that at all! But it did make me think about beige and how trends and attitudes about beige in all its varieties have fluctuated recently.

We’ve known for at least a year that beiges, greiges, and taupes coming back in interior design after a decade long smack down by gray. This last High Point Market showed that vendors are seeking to add more warmth in interiors according to demand after the long cool spell.

The ever insightful Laurel Bern wrote an ode to the death of the boring beige living room last summer, thanks to Mark Sikes’ stunner in the Southern Living Show House.

In the last year, beiges have become a favorite paint color for kitchen cabinetry and even have designer/bloggers like Erin at Elements of Style (she, who painted her own cabinetry gray and white!) and Kate at Centsational Style lusting after these sophisticated-but-down-to-earthy colors.

The U.K.’s Devol Kitchens and its Instagram feed probably have something to do with it.

But regardless of the gray phase of the last 10 years, greige, taupe, even beige — these color names still meet with the approval of our 21st century aesthetic sensibilities.

But you know which “brown” color name has NOT met with approval? … TAN.

TAN makes you think 1990s builder’s grade beige (a very good post about why contractors use this shade). 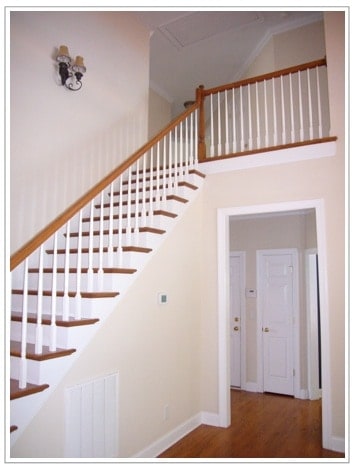 And one color that gets a really bad rap because “tan” is in its name is Benjamin Moore’s Manchester Tan.

I like Manchester Tan. It’s a sophisticated light greigey beige with a hint of a green undertone to keep it from veering yellow. That green undertone can also help it play really well with warm grays. This can particularly help with solid surfaces like granite, stone, and tile.

It looks pretty similar to deVol’s custom cabinetry color above, doesn’t it?

It’s featured on about a bazillion “Best Neutral Paint Color” palettes on Pinterest.

And even Bob Vila of This Old House fame lists it as one of his fail-safe colors.

But no one wants to use it!

Why? I think because the name is TAN.

You know how Juliet says, “A rose by any other name would smell as sweet?” (Romeo & Juliet, Wm. Shakespeare)

Well, I agree with Anne Shirley, who said, “I’ve never been able to believe it. I don’t believe a rose WOULD be as nice if it was called a thistle or a skunk cabbage.” (Anne of Green Gables, L. M. Montgomery) 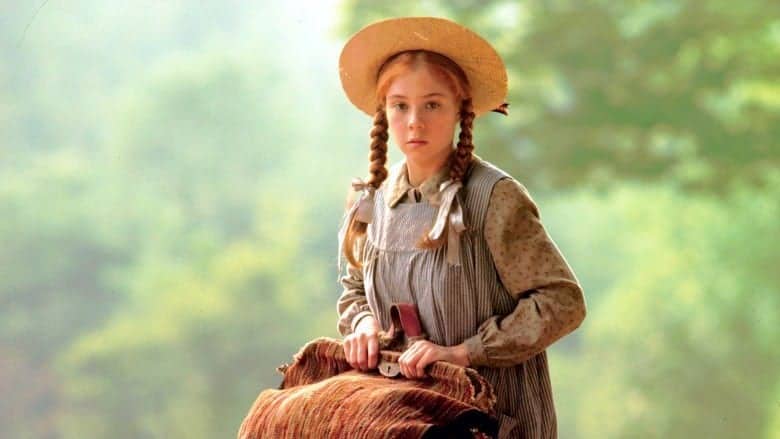 Manchester Tan can really be a lovely, airy color. Dress it up with deeper tones or relax it down with pale hues and natural textures. But until Ben Moore decides to change the name (not likely), I’ll just have to let the pictures do the talking about this amazing “tan!”

As always, never choose your home’s colors because of pictures you find online (more about that here), but having a ton of room images that look lovely does weigh in favor of the color’s being a good one overall. 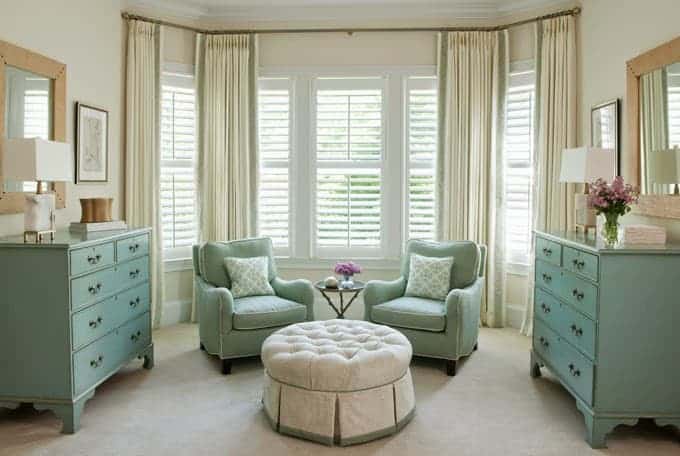 Designer Patricia Fisher chose to use it in her own magazine-worthy Hamptons cottage. It’s so relaxed with blue, brown furniture, and natural textures. 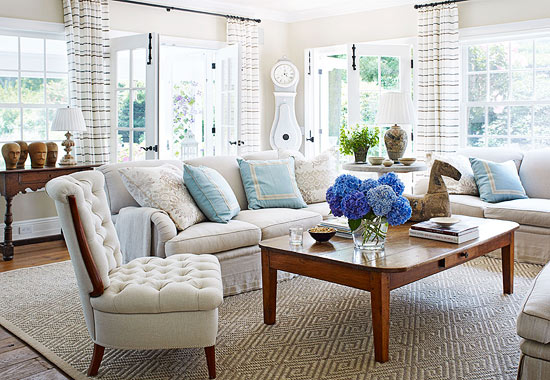 Liz Levin shows that Manchester Tan need not only be for sea-side inspired homes, with the below jewel-toned Georgetown residence… 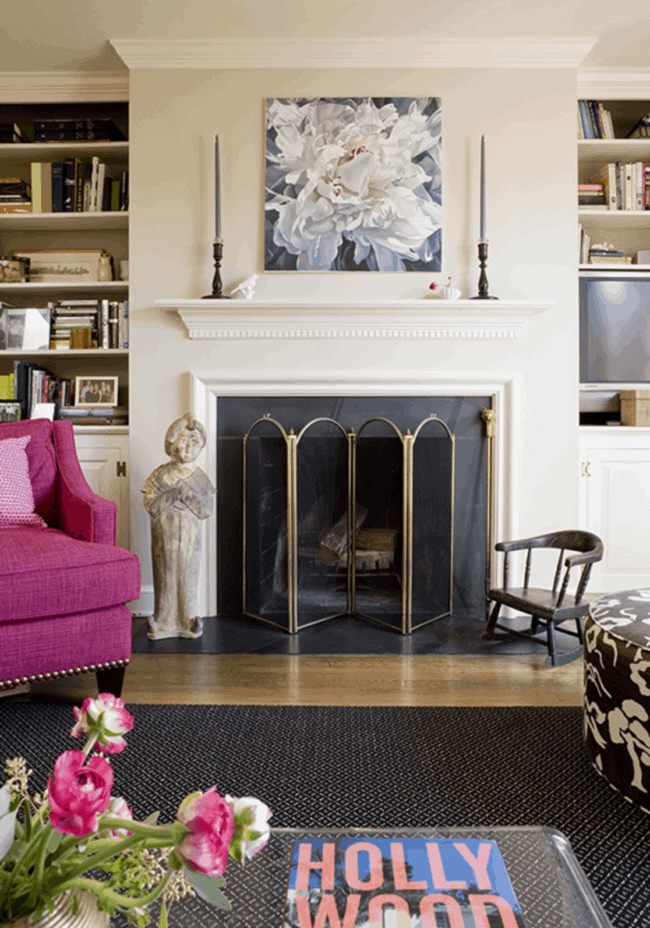 …AND this lovely Bethesda residence. I would have liked a little more color and pattern on the pillows perhaps, but the pale blue ceiling is lovely. 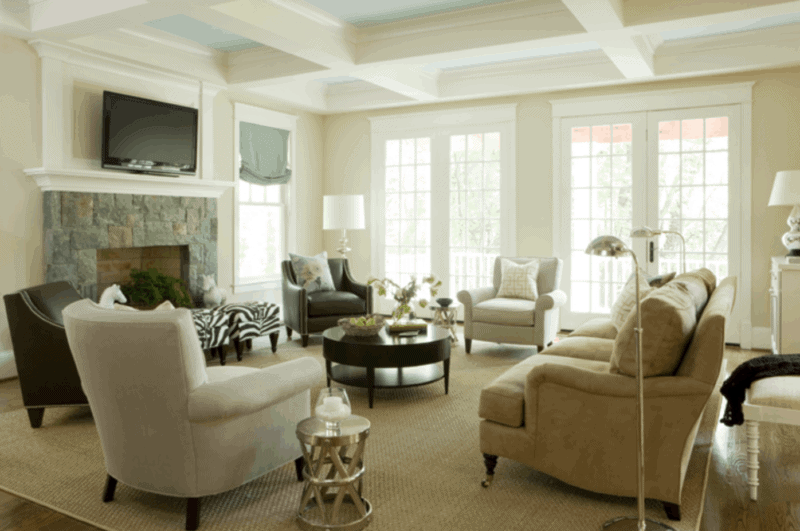 See how the Manchester Tan works so well with the mottled gray stone fireplace? That’s the green undertone talking!

Another designer who chose Manchester Tan for her home — Lindsay Brier employed it in her 1920s Pacific Heights condo in San Francisco. 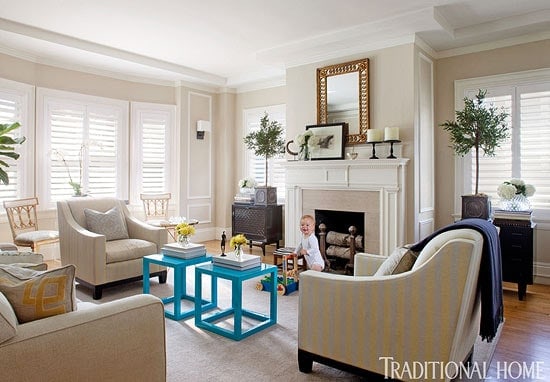 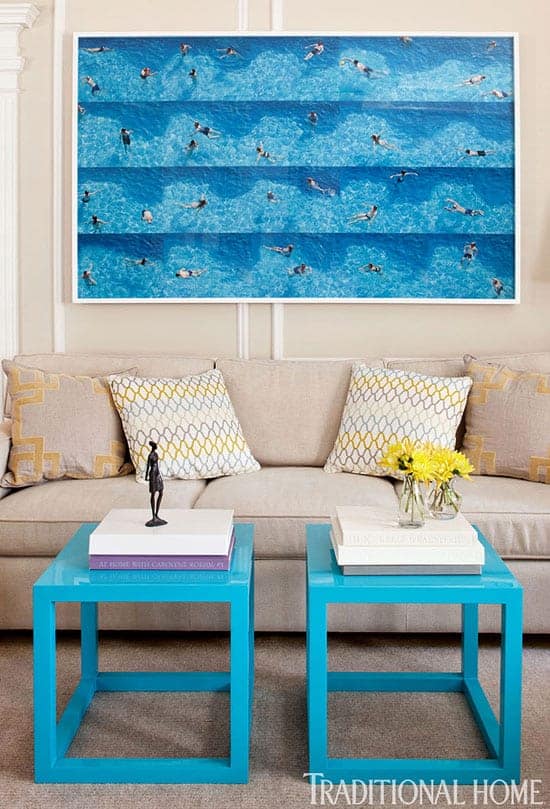 It is a light neutral for open floor plans for those who don’t want to go white… (Sorry the below image is so small!)

…and still plays nicely with all those weird angles you sometimes find in great rooms.

Any feelings about Manchester Tan or its beigey, greigey brothers and sisters? Are you still on the gray bandwagon or have I tipped your taste toward a little greige????

A pin to remember me by! 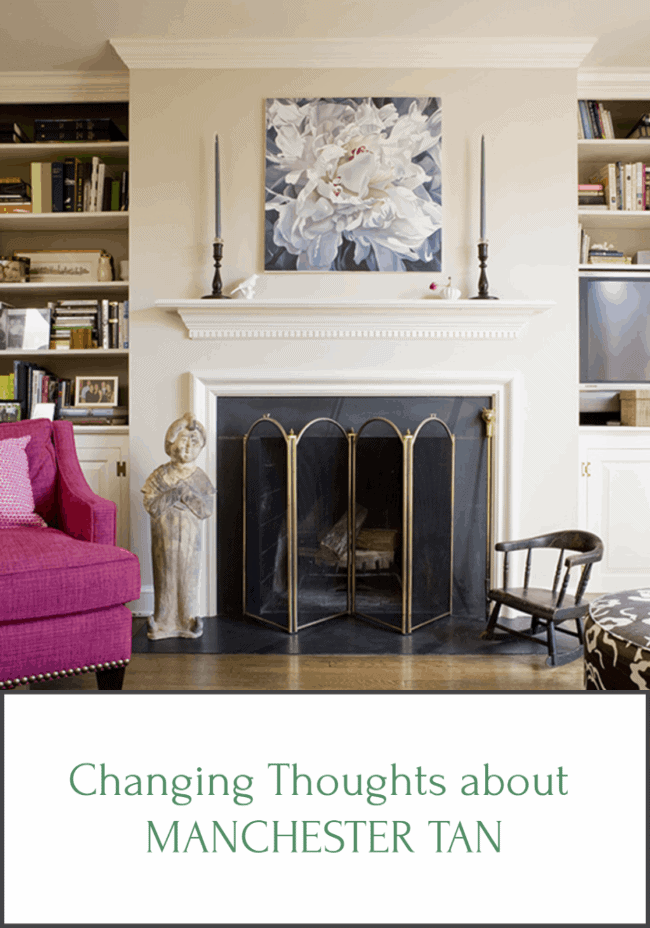 7 thoughts on “Is Tan a Dirty Word? Changing Attitudes about Greige, Beige, Taupe … and Manchester Tan”

PrevPrevious4 Styles Compete in the 2017 Home for the Holidays Show House (Can You Choose a Winner?)
NextColorful Kitchen Island Pendants & LanternsNext